I installed a Harbor Freight Truck Crane (item 37555) today. I convinced them to give me the internet price of $99, though store price was $129. It comes with a small 7x9 base. If I bolted this base to my bed, as is, it would destroy the bed due to leverage effect. A lot of people talk about how this small base will bend a pickup truck bed.

Update!!! The Harbor Freight winch failed and JAMMED when I tried to lift a 300 lbs rotary table. As a replacement, I bought a 1,200 lbs winch from McMaster-Carr. See pictures below. Cost was about $37.

Update!!! I also decided to replace the Harbor Freight galvanized wire rope, which was very stiff and kinky, and the hook that I did not like, with a McMaster stainless wire rope and a larger, nicer crane hook that I had. The HF hook was too small and a lot of rigging combinations that I needed, did not fit in it.

To spread the load a little better, I used a 13x14 steel plate that was 5/8" thick. Using the base as a template, I drilled and tapped 1/2"-13 holes for the base, as well as for the steel angles that are used as backing. Then I painted it with a "cold galvanizing paint" three times, and painted the top green with a tractor green paint that I had.

Then I bolted all of that down. I tested the crane at full extension by hanging my own body off its end and trying to kind of bounce up and down. I weigh a little less than 200 lbs fully clothed, so I would say load at the end was 300 lbs max. This was clearly the limit of what this bed/mounting would be able to handle. So, its range is approximately 300 lbs at full extension and 600 lbs at minimum extension.

Note also that I expect that a higher load would somewhat bend the bed, but I do not expect it to tear itself off the bed completely, due to presence of bed reinforcements under the bed (crossmembers). Most likely outcome would be the bed corrugations somewhat compressing. Obviously, I would rather avoid testing that.

My plan for handling heavy loads is to remove the tailgate, I think that it would allow me to use the crane at minimum extension, for most things.

Conclusion after a while of use: this crane is very useful, in fact I now consider having it almost essential for a person who frequently loads moderately heavy stuff. It does have a few very disappointing problems. 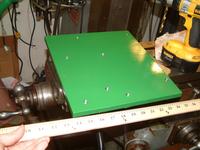 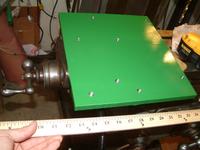 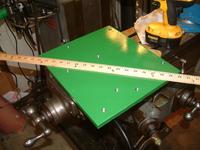 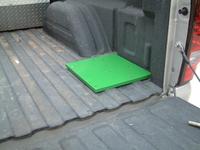 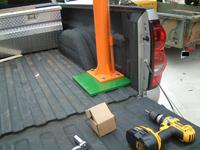 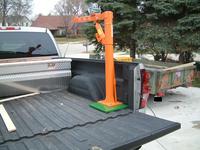